What happens at 4 weeks of pregnancy

By the middle of the fourth obstetric week of pregnancy, the ovum enters the uterus and is implanted in its wall. This process can occur from 3 to 12 days from the moment of conception. The fetus is not yet visible on ultrasound, but its appearance has already provoked the start of a cardinal hormonal adjustment in the mother’s body. It is in the second week of the embryo’s life that some women begin to notice the first early signs of pregnancy and make the first attempts to learn about their situation. 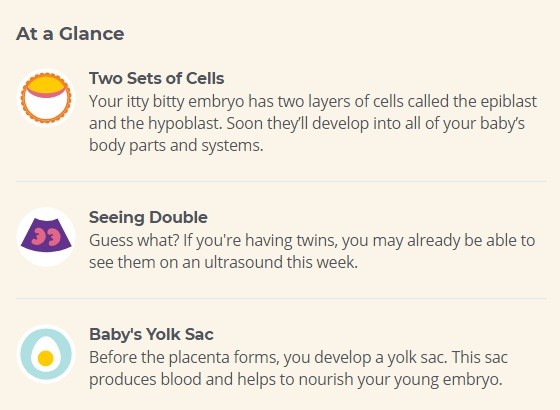 Baby at 4 weeks of pregnancy

Fetal egg continues to grow in size. The embryo is not yet visible to the naked eye, and on the 8th – 9th day of conception it is a formless set of cells. However, the next 7 days will be a breakthrough in its development and will radically change its appearance. Now, the ontogeny of the embryo should be considered according to the degree of improvement of its organs and body parts.

Musculoskeletal system. On the 11-12th day the chord is formed – the future spine. It is located above the neural tube. Around the notochord is embryonic tissue, which over time begins to transform into more solid, cartilage.

Central nervous system. By day 7 of conception, the spinal ectoderm is transformed into a neural plate. After two days, its edges are lifted, forming nerve ridges and a nerve groove in the middle of the plate. In the next few days, the edges of the neural plate change their position and become even higher, forming a neural tube. If at this stage of the formation of the central nervous system the neural tube does not close completely, then this will lead to various developmental defects in the child or to the death of the embryo and subsequent miscarriage.

Organs of digestion and excretion are formed simultaneously with a complex of axial organs. They are derivatives of endoderm, the inner germ layer. By 13-14 days from the moment of conception, the embryo has a primitive intestine.

Auxiliary items. By the 14th day from the moment of conception, the yolk sac is formed, which is not part of the child’s body, but throughout the first trimester it will perform important functions: the embryo’s circulatory system will be formed with it. In addition, it will play the role of the primary liver and will supply the proteins essential for the vital activity of the embryo. In the second week from conception, the umbilical cord is formed, through which the fetus will receive basic nutrition and oxygen throughout pregnancy.

All these stages of embryo development from 7 to 15 days from the moment of fertilization of the egg can only be seen under a microscope.

What to expect at 4 weeks of pregnancy

On the fourth obstetric week of pregnancy, the body of the expectant mother notices the pregnancy and begins to react to it. The consequences of these reactions can be both explicit and hidden, which are found only during special examinations. Among the early signs of pregnancy are the following:

Heartburn – may appear 2-3 days after the implantation of the ovum. Its occurrence provokes progesterone, the concentration of which increases as soon as the hormone begins to be secreted in the blood.

Drowsiness – the earliest occurrence of this symptom can be attributed to the 12-13 day after fertilization. While it does not arise from the fact that the body gives all the power to bear the child (this will be the cause of increased drowsiness later, with an increase in the duration of pregnancy). Now, in the second week of the fetus’s life, an overwhelming desire to sleep is due to a high level of progesterone – just like in the case of heartburn.

Aversion to odors – occurs approximately 14-15 days from the moment of conception. This sign of pregnancy is caused by a rapidly increasing concentration of the hormone in the blood.

Nausea – vomiting in pregnant women is rarely observed 2 weeks after conception. In most cases, only nausea occurs at this time. It is caused by high levels of hCG. Under the influence of this hormone, changes occur in the digestive system of women. The result of these changes are failures in the assimilation of food.