How to sleep during pregnancy 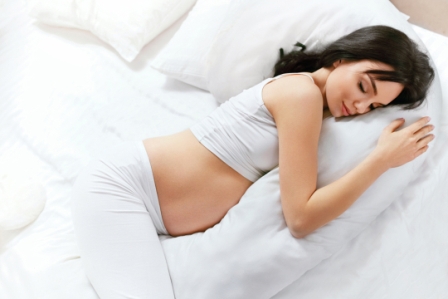 Every woman in such an important period of life for herself, as carrying a child, should fully rest. Sleep pregnant: healthy sleep for any person is at least 8 hours, then this statement applies to pregnant women. When planning the rest time, attention should be paid to such trifles as awareness of which side to sleep on during pregnancy. After all, the sleep posture for a pregnant woman plays an important role, since it depends on whether the baby will be comfortable, and the mother herself. On what side can and should sleep during pregnancy, so as not to cause discomfort to the child? Let’s try to understand this issue in this article.

The right posture for sleep during pregnancy

Each person has a comfortable posture for a night’s sleep, in which he arrives for a long time. But pregnant women must adapt to their changed position and not always their favorite posture becomes suitable and comfortable for sleep. In addition, some poses can be dangerous for the baby or so uncomfortable that it is unlikely to fall asleep.

In the first weeks of pregnancy does not give a woman discomfort, so she can not even think in what position and on what side to sleep during pregnancy. Rest in the first 12 weeks is available in any position. But soon, as the tummy grows, the woman will have to adjust her position in the dream. This is surprising, but the pose taken by the expectant mother in a dream can both contribute to the normal development of the fetus and prevent it.

There is not much to choose. Thinking on which side it is better to sleep during pregnancy, a woman comes to the conclusion that you need to sleep more often on the left side. This pose helps to obtain the desired amount of nutrients crumbs, because the blood circulation in this position is not broken and that does not interfere with the flow of oxygen into the body. Lying on her left side, the woman protects her liver from compression, which improves heart function. Sleep in one position, of course, will not work, so during the night you need to change your position several times.

If the fetus is in a transverse position inside the uterus, it is recommended to sleep on the side in which the baby’s head is located. But on what side to sleep during pregnancy, if the baby is in the pelvic presentation? In this case, it is necessary to turn over from side to side during the night from 3 to 5 times.

Figuring out which side to sleep on during pregnancy, we realized that the most optimal posture is lying on the left side. In the early stages, pregnant women curl up in a position that promotes restful sleep. But with increasing time, the possibility of folding into this position is reduced, because the uterus and the bend of the spinal column at the waist increase, which forces the expectant mother to take a straight position in a dream. But what to do when from staying on the side for a long time begins to hurt in the hips?

Here are some guidelines to follow when experiencing hip pain:

How not to sleep during pregnancy

On what side to sleep during pregnancy is impossible? This is not the only issue of concern to women. Is it allowed to sleep on your back? Many people like to sleep on their backs, so it is important to know until what week expectant mothers can do it without harm to the development of the fetus. Sleeping on your back is safe in the first half of pregnancy.

But after 22 weeks of pregnancy, you need to change your preferences. Between the uterus and the spinal column is the largest vessel in the body-the inferior Vena cava. This vessel is engaged in the transportation of blood from the limbs and torso of a person to his heart. During pregnancy, the fetus exerts additional pressure on the Vena cava, which is why there is a risk of developing inferior Vena cava syndrome, with strong clamping of the vessel.

When a vein is experienced, the volume of circulating blood decreases. This condition is assessed by the body as a large acute blood loss, which leads to the following symptoms:

This condition is very dangerous for the development of the child inside the mother: the baby lacks oxygen, which affects his overall health. For this reason, sleeping on your back during pregnancy is prohibited. At usual rest, or on procedure of ultrasound, the woman, having felt badly, can immediately change the position. But during sleep, reactions can be invisible, so sleeping on your back is dangerous for both the pregnant woman and the baby she carries under her heart.

It is recommended to abandon the rest on the back in the second trimester, if a multiple pregnancy or polyhydramnios is confirmed. Also by sleeping on your back you need to give up and with the threat of miscarriage, when the baby’s head is too low.

how to sleep pregnant
Is it possible to take a position on your stomach to sleep during pregnancy? Many people this pose seems the most convenient. And expectant mothers are no exception. But sleeping on your stomach during pregnancy can only be up to 12 weeks, when the uterus is still under the protection of the pubic bones. After 12 weeks from lying on his stomach is better to abandon, as this position exerts extra pressure on the growing tummy and can be dangerous for the child.

Lying on your stomach during pregnancy after 20 weeks, squeezed vessels through which the placenta receives nutrients for the fetus. This position is even more dangerous than the compression of the Vena cava when lying on your back.

Some first-born women suffer from high breast sensitivity, which also prevents the adoption of poses on the stomach for sleep.

The duration of sleep of a woman in the normal position is from 8 to 10 hours. Less than 8 hours of sleep is not recommended for health. It is also recommended to add a few more small rest breaks during the day. If a woman sleeps less than normal, then this lack of rest affects her health as follows: appetite worsens, depressed mood prevails, the immune system weakens.

The quality of sleep of a pregnant woman depends on her lifestyle and daily routine. Prepare yourself for a quality night’s sleep a woman needs in the morning.

To do this, it is recommended to comply with the following conditions:

Take a relaxing bath at night, ask your spouse to massage your legs or back. Just a good option for falling asleep will be sex before going to bed, if it is not prohibited during pregnancy.
If a pregnant woman has pronounced insomnia, then medications chosen by a doctor can help. More often appointed such sedatives as Glycine, tincture of Valerian or motherwort.

Organization of night rest during pregnancy

The following preparatory measures can contribute to the onset of sound sleep: 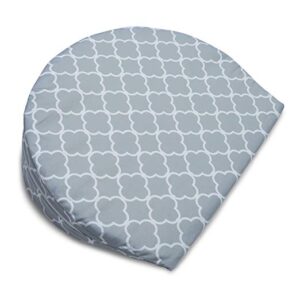 Rapid falling asleep during pregnancy is often facilitated by the use of small soft pillows that can be conveniently placed under the waist, under the side, legs.

Growing tummy is the main obstacle to quality night rest during pregnancy. Pillows can help the future mother to get more comfortable and find the optimal position for falling asleep.
For example, it is perfectly possible to settle if to place one pillow under a tummy, and the second to arrange between knees. When placed on the left side, you need to straighten your left leg, bending your right.

You can try a lot of options for the location of pillows, changing their places and increasing the number. The right pose is sure to be found.

A great way out is the use of specially created pillows for pregnant women. Such bedding is created taking into account all the physiological characteristics of the pregnant body, which makes them very convenient to use. Forms of pillows for pregnant women can be different. For example, the shape of a horseshoe will help you fall asleep more quickly, taking one of the comfortable poses.

Especially for you we have made a selection of the best pillows for pregnant women. You can see it on this page.

If sleep during pregnancy has become a real problem for You, then do not despair, because there are plenty of options to establish a rest. One is sure to suit you. Remember that sleep for pregnant women is very important, because soon in Your life there will be a baby who will require a lot of energy. Sleep at night will be equal to unrealizable luxury, so you need to rest and gain strength, while the baby has not yet been born.

Night sleep is the key to normal intrauterine development of the baby and the basis of a strong emotional state of the future mother. To eliminate problems with sleep, you need to understand the cause of their appearance. If necessary, you can change the diet, daily routine or adjust the pastime in the fresh air before going to bed.

With problems with falling asleep, you need to pay attention to the posture of falling asleep, because the quality of sleep depends on which side to sleep during pregnancy. If a woman thinks about the upcoming birth at night, worrying and worrying, then you can seek advice from a psychologist, or go to courses for expectant mothers. When all the causes of sleep disorders are eliminated, and the anxiety goes away, then a quiet sound sleep will not take long to wait.

You can also read about other difficulties that women may face during their pregnancy in this article.