How much water should i drink when pregnant

No man on this planet can live without water. Even its small deficit leads to disruption of the body. If we are talking about the representative of the fair sex carrying a child, the significance of the water norm becomes even greater, since the condition of not only the mother, but also the baby, depends on the quantity consumed. And yet, how much water should a pregnant woman drink? 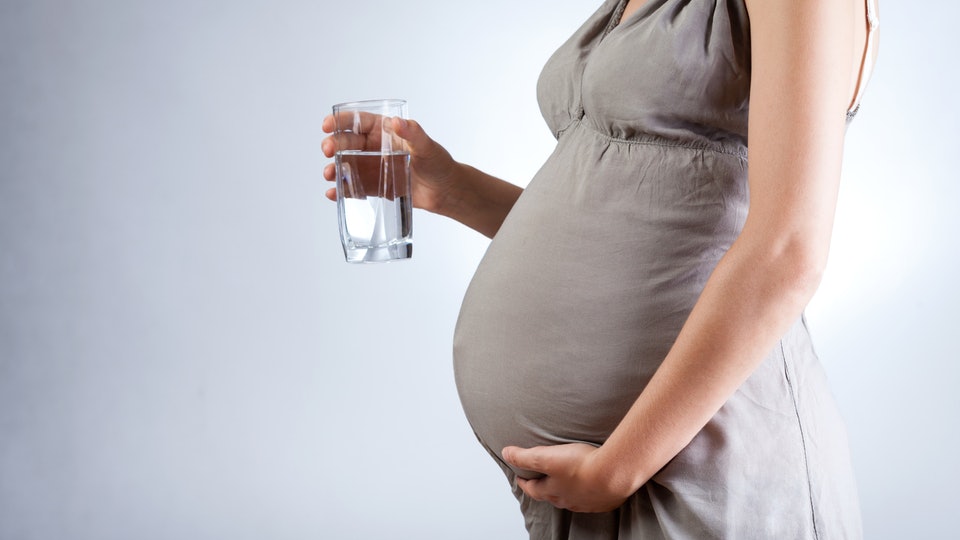 Why is it important for pregnant women to drink water

If we talk about how much water a pregnant woman should drink per day, then for the normal functioning of the body, at least two liters are necessary, one and a half of which are subsequently excreted through the kidneys, and the remaining 0.5 liters through the skin and breathing.

When carrying a child in a future mother, the amount of blood increases by 50-60%. Thanks to this, the baby in the womb receives all the nutrients necessary for development. And given that the blood consists of 80% water, the amount of fluid that a woman consumes during the day is very important.

Another reason why a pregnant woman needs to drink a lot of water is that this helps prevent inflammation in the urinary tract. After all, as you know, they undergo changes in this period, which provokes the development of certain diseases. When more water begins to enter the body, excretion also increases, that is, the elimination of harmful substances and decay products from it. Due to this, bacteria are washed out faster than they manage to provoke an inflammatory process.

A sufficient amount of fluid for a pregnant woman is necessary because it is from her that amniotic fluid consists of 99% of it. Starting at week 25, amniotic fluid increases in volume by 50 ml every seven days. Closer to week 37, amniotic fluid reaches a volume of about one liter.

If the expectant mother during pregnancy drinks the necessary amount of fluid, this helps to prevent her delay in the body. Despite the fact that the blood volume increases during this period, it’s okay if a woman has a slight swelling. However, in some cases, the latter is so pronounced that it interferes with the usual way of life and carry out everyday duties. In this situation, it is the consumption of a sufficient amount of water that will improve its circulation in the body and remove salt, which promotes fluid retention.

If we talk about how much a pregnant woman should drink per day, it is necessary to understand the reasons why the body needs a lot of moisture. These include:

How much water to drink first trimester

Drinking a sufficient amount of water is especially necessary in the first trimester, since it goes both to the formation of amniotic fluid and to an increase in blood volume. In addition, all metabolic processes in the body take place in a humid environment. According to the recommendations of specialists, a pregnant woman should drink at least 2500–2800 ml of liquid per day.

It is worth noting that water is involved in all the processes that occur in the expectant mother, that is, biochemical, the formation of fetal organs and systems, the removal of metabolic products and toxins from the body of a woman and a child.

In addition, the intake of the required amount of fluid will also help alleviate the toxicosis that most pregnant women suffer from. 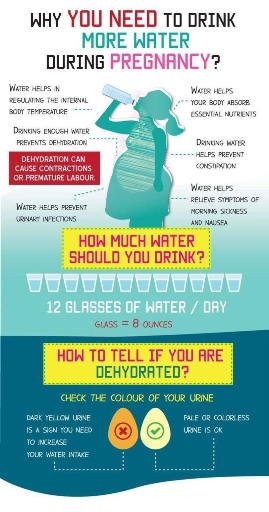 How much water to drink second trimester

During this period, the active growth and development of the fetus occurs. It is in the second trimester that the metabolic rate reaches its maximum. There is also a lot of fluid at this time, since the amniotic fluid is renewed at three-hour intervals.

However, from a period of 20 weeks due to such a rapid growth of the fetus and an accelerated metabolism, problems with the functioning of the kidneys and liver can occur. This in turn leads to the appearance of edema.

Most often, due to excessive load, the kidneys begin to work poorly, fluid stagnation occurs, and this can happen even in those women who did not encounter similar problems before pregnancy.

The cause of this pathology is determined by the gynecologist, in whom the expectant mother is registered.

It should be noted that if a woman has swelling, this may indicate the development of late toxicosis (gestosis). As a rule, the cause of this condition is impaired kidney function, since they can not cope with the load. This is a rather dangerous deviation for a pregnant woman, which can adversely affect both the state of the mother and the development of the child. If the expectant mother was suspected of gestosis, she is recommended to keep a diary in which she should note how much fluid she drank per day and how much came out with urine. Additionally, her duties include weighing, which is also fixed. Thanks to these measures, the doctor will be able to recognize violations in the urinary system in time.

A woman who constantly keeps a diary while carrying a child keeps under control not only her health, but also the condition of the baby.

In some cases, to get rid of edema, the expectant mother needs to reduce the amount of fluid that she consumes during the day. However, the doctor should inform her of this. As a rule, at this stage of pregnancy, gynecologists do not advise women to drink a lot of water, even if no deviations are observed.

However, too little fluid can be no less dangerous than its excess.

It is worth considering that as a result of the growth of the uterus, the position of the urinary organs changes. This leads, firstly, to a violation of the outflow of urine, and secondly, to an easier penetration of infections into the female body. If in this condition there is also a lack of fluid, then the likelihood of a disease increases several times.

Particularly dangerous is the reduction in water consumption against the background of such pathologies as varicose veins, urolithiasis, and diabetes mellitus. This can lead to a deterioration in the clinical picture of an existing ailment.

How much water to drink third trimester

Closer to childbirth, the amniotic fluid is not renewed so often, the volume of circulating blood also decreases, that is, it thickens. Thus, nature is trying to protect a woman from great blood loss during the upcoming birth.

At this stage of pregnancy, almost every expectant mother has either swelling of the lower extremities or pasty. In this case, both pathologies can be associated with an excessive amount of fluid in the body, either directly or indirectly. With the approach of childbirth, the hormonal background begins to change, which leads to the preservation of part of the fluid so that the process of restoring the mother’s body after the baby is born is faster and lactation starts safely.

In the last stages of pregnancy, as well as during childbirth, the concentration of oxytocin in the blood increases, which, in addition to stimulating uterine contractions, also causes moisture retention in the body. Thus, edema in expectant mothers can occur not only with excess water, but also with a lack of water. So the body tries to compensate for the lack of moisture, storing it in the tissues.

To find out the cause of the appearance of edema, keeping a diary will help, in which it will be recorded how much liquid is drunk, how much is allocated. It is better to make a table in which in one column record the amount of water consumed per day in milliliters, and in the second – the amount of urine excreted by the body. Thanks to this doctor, it will be easier to evaluate the work of the kidneys and establish the exact cause of the appearance of puffiness.

It is worth noting that maintaining such a record makes a pregnant woman more disciplined in terms of water and food consumption, which is very important both in excess and in shortage.

If a specialist determines that there is an excessive accumulation of fluid in the body of a future mother, then it will be necessary to reduce the amount of water so that the kidneys do not overload. This will allow you to reach birth without complications and give birth to a healthy baby. However, the opposite situation may arise, then the volume of fluid consumed will have to be increased.

There is another way to determine if the body needs water or, on the contrary, there is too much of it. However, it is worth noting that it does not differ in absolute accuracy, since it is based on a subjective assessment of the woman herself. The test consists in determining the intensity of urine staining: if it is light yellow, then the fluid is sufficient, saturated, dark – there is not enough moisture. If we talk about the rules, then the color should be either straw or straw yellow.

intake of water during pregnancy

To prevent the occurrence of swelling, a pregnant woman should adhere to the recommendations of her doctor and nutrition specialist.

Water while carrying the baby must be drunk according to the rules:

On a day, the expectant mother should drink about two liters of clean liquid. In this case, it is necessary to divide its volume into equal parts and use it at regular intervals.

A pregnant woman should always have water with her. This is necessary so that in case of severe thirst, do not take an excessive amount of liquid.

You should drink slowly, in small sips. During this time, the brain manages to receive a signal that the body has received fluid and that water balance has been replenished.

According to doctors and nutritionists, not all drinks are useful for a woman carrying a child:

The main source of moisture for a pregnant woman should be clean water. In addition, the following mother can drink the following drinks:

A pregnant woman needs to be careful not only about what she eats, but also about the drinks she drinks. The fact is that some of them can adversely affect the development of the child. To drinks, the use of which should be either limited or completely stopped, include:

According to doctors, during pregnancy it is worth excluding tea and coffee from the diet, as they contain a lot of caffeine. This component excites the nervous system, which in turn can cause a miscarriage or premature birth. As for carbonated drinks, then from them there is no benefit for the body of the future mother. They are simply a source of extra calories.

Water plays a huge role in the development of the baby in the womb. She participates in all processes occurring in the body, however, it should be remembered that she must be drunk carefully.

If a woman says that she uses a lot of water during pregnancy, this may indicate that she has problems with the kidneys or urinary system.