What happens at 6 weeks of pregnancy

6 week of pregnancy falls in the middle of the first trimester. During this period, there is an active development of the circulatory and digestive systems of the embryo, as well as the laying of the membranes of the membranes. What else awaits a woman and her baby in the 6th week of gestation? 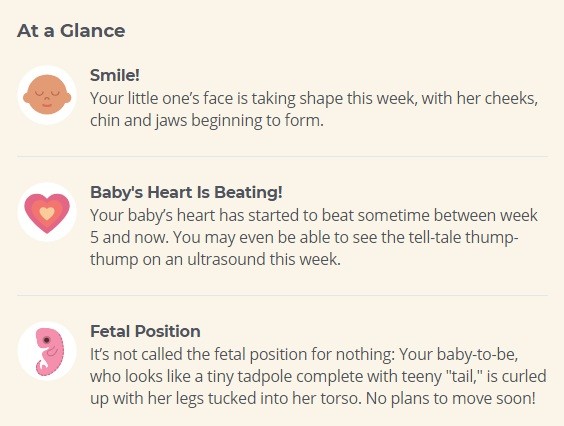 Baby at 10 weeks of pregnancy

At 6 weeks of gestation, the embryo is less than 1 cm long. The tiny body of the baby is curved in the shape of the letter “C”. The rudiments of the upper and lower extremities appear on the trunk, and the rudiments of the ears, eyes and nasal passages are traced on the head.

6 obstetric week is marked by the active development of the embryonic circulatory system. Two heart tubes in the baby’s chest merge with each other and form a two-chamber heart consisting of one atrium and one ventricle. At 6 weeks, the organ begins its work, and on the ultrasound you can clearly hear the heartbeat of the embryo.

Week 6 is key to the formation of the main sections of the brain and spinal cord. At this stage, the embryo’s brain consists of two separate bubbles, from which large hemispheres will be formed later.

Not only the internal organs of the embryo change at week 6. During this period, the formation of the amniotic membrane – the future fetal bladder. The vascular network is formed in the walls of the yolk sac, primary blood-forming sites appear and red blood cells are produced.

What to expect at 6 weeks of pregnancy

At 6 weeks of pregnancy, toxicosis comes into its own. According to statistics, more than 70% of women suffer from this pathology during pregnancy. Experts are still not able to find out the exact cause of this condition. It is assumed that the development of toxicosis is associated with the rapid growth of HCG – a specific hormone, produced during pregnancy. Probably, this also explains the fact that toxicosis disappears by 12-14 weeks, when the level of HCG decreases markedly.

The severity of symptoms can be very different: from mild ailment to a severe condition, accompanied by dehydration. It is noticed that diseases of the digestive tract aggravate the course of toxicosis. In women suffering from gastritis and pathology of the biliary tract, toxicosis is more severe and lasts up to 16-20 weeks of pregnancy.

Fatigue and apathy a week ago do not disappear anywhere. Every day the breakdown is becoming more noticeable. Many women are ready to sleep 12 hours a day. Resist this is not necessary. Whenever possible, you should rest during the day. This condition is considered perfectly normal for expectant mothers and is another confirmation of a normal pregnancy.

The pronounced effect of progesterone affects the mood of a woman, she is overcome by a real emotional storm. Unjustly good mood gives way to an attack of depression, laughter turns into tears for any reason. In the second trimester, hormonal levels will even out and it will become much easier to contact with the outside world. In the meantime, one should be patient and take for granted sudden emotional outbursts and mood swings.

For a period of 6 weeks, abundant natural discharge from the genital tract is preserved. Such discharge should be clear or milky, and not be accompanied by any unpleasant sensations. The appearance of yellowish-green discharge, itching and burning sensation indicates the development of infection. In this case, you must be examined by a gynecologist and start treatment as soon as possible.

At 6 weeks of gestation, you should carefully monitor their condition. The entire first trimester is a period of increased risk for the embryo. It is in the early stages that up to 90% of all miscarriages occur. On the threat of abortion say lower abdominal pain, radiating to the sacrum or lower back. Evidence of incipient miscarriage and spotting brown discharge from the genital tract, often turning into profuse bleeding. If any of these symptoms appear, you should immediately visit a doctor or call an ambulance at the hou